Back in the early eighties, one of my best friends introduced me to a bunch of music I really wasn't ready for at the time: Dead Kennedy's, Suicidal Tendencies "before they sold out", Butthole Surfers, and a bunch of others who's names I can't remember now. Shannon had run away from home. He was squatting in an abandoned house in Denver with some other punk rockers and skin heads. I seem to remember that he had some respect for Metallica at the time, but I didn't know that band for probably another decade. He also left some vinyl records with me including The Who's Next and Pink Floyd's Dark Side of the Moon.

One especially memorable night I was hanging out with him and his friends. Now understand... there was absolutely no way I could ever have been allowed in this punker home without Shannon's introduction. I was a total preppy at the time, collar up and everything. I was listening to pop music of the time like Howard Jones, Flock of Seagulls, Duran Duran, Brian Adams, Loverboy, or some older seventies stuff like Styx, Boston, Eagles, ELO ... do you have the picture? Could not have been a less likely crowd for me to hang with for even a few hours.

Fast forward a few years to 1989. I transferred to CU in the spring. My brother and I were on our way out to a fancy dinner with my mom and uncle -- we were dressed in ties and maybe coats too (which will be important for the story later). We ran by my dorm to drop off my stuff. I think I spent that weekend at Mom's house and came back to the dorm a day or two later. When I arrived one wall of the room had been newly decorated with a sheet painted with all sorts of punk rock images and slogans. I recognized the DK and punk snot dead and Sex Pistols. Black Flag's logo seemed familiar from somewhere (tho' didn't know at the time it belonged to Black Flag). I wasn't sure what to make of the "Die Frat Boy Scum." Could have been a band name, or just something keeping with the theme.

I thought to myself, "Cool. My roommate must be a punker." It was really a beautiful bit of punker graffiti art.

It was another day or more before I actually got to meet my roommate, his friend across the hall, and a woman they hung out with often. All were in jeans, t-shirts, and painted leather jackets. The friend across the hall wore his hair in a short mohawk, the woman was shaved on one half and long purple and black on the other half. My roommate was just starting to learn guitar. We had a long and pretty interesting conversation about a lot of things, but mostly music and where we were from. At some point my roommate asked "Are you an ATO?"

"I don't know. Can you be one without knowing it?" I replied. It seams one of the guys down the hall saw Greg and I when we moved my stuff in and assumed by our dress that I was in a fraternity and really gave Steve a scare -- thought he'd seen an ATO pin on one of our lapels. That more or less explained the "die frat boy scum" thing, anyway. Whenever I think about this it makes me laugh out loud at the tragic horror that must have filled that dorm room as my roommate and his friends decorated that sheet, laying down the anti-establishment ground rules from the outset. I also can't miss the irony of just how well I would have fit the part of frat life, if I'd known anything about it at the time. It must have been a huge relief that I mostly knew who Jello Biafra and Sid Vicious were. It was cool hanging out with punkers. I went been to some local shows and played in the mosh pit on at least several occasions.

Another few years on, my own tastes had migrated to big hair bands. I had lived with another musician, Scott, who was a guitarist in a local heavy metal band. Greg had also introduced me to Metallica and Queensryche and Megadeath and I pretty much became a head banger -- hair down to the middle of my back and everything. I think it was around this time that I caught up with Shannon once again and got to tell him about my short life living with punkers.

I think it was at that time that Shannon described a poetic jacket he'd seen some years before. It was clearly very beaten up and had obviously once been thoroughly painted. Only one glyph was left on the sleeve. The faded words "punk snot dead" around which was a more freshly painted tombstone embossed with R.I.P. I've never been able to get that image out of my head and so tonight decided to see if I could recreate something like it. Kind of a present to Shannon for having been the first to broaden my musical horizons beyond pop radio and a thank you note to anarchists everywhere. 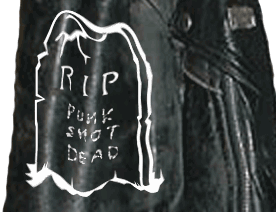 There's a little more to tell in this story too. When I was living in Las Vegas in the mid 1990's, I went to see The Offspring in concert with a specific interest in seeing what punk rock looked like back from the grave. It was a huge and pretty fun show. I think there were three different mosh pits going at one point. I'm pretty sure that's the last time I moshed. Except for those pits, it seemed an awful lot like a big hair band arena sized concert.

And to add just a little more contrast to my musical influences... I also learned some ballroom dance and especially the Lindy Hop with the UNLV Ballroom Dance team. When I moved back to Boulder, I was quite active in the Denver Lindy Hop scene. Mom couldn't believe I was dancing my socks off to the music her father loved!